I know I have beaten this dead horse quite a bit by now, but just let me remind everyone once again, I was a waiter for many years. It is important to me that you know where I am coming from when I post some of these controversial subjects on my blog.

This didn’t actually happen to me, but to a dear friend of mine who I worked with at a restaurant here in town for many years.  He went out to dinner last night with some good friends who are moving out of town.  It was a special gathering.  There were six of them, and they happened to bring in two bottles of wine.  Two very big bottles of wine. 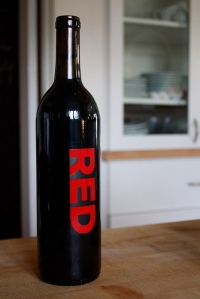 Okay, they had a magnum (equivalent of two bottles), and a double magnum (equivalent of four bottles).  Most of these diners work in the restaurant industry in various capacities, general manager, bartender, waiter, etc., and know the routine.  All servers hate seeing people bring in their own wine.  They want to up that check as much as possible, so when they get their twenty percent tip, it is on a bigger total.  My friend realizes this, so the first thing he did when greeting the server was take them aside, apologize for bringing in all of this wine, promise them that they would take care of them at the end of dinner, and slipped them $20 as an upfront guarantee of what they could expect ahead.

Yummy wine from my cellar

In fact, everyone hates seeing people bring in their own wine.  Owners want to sell their wine at ridiculously marked up prices.  They don’t care that it might be a special occasion and this could be a special bottle from the customer’s cellar, and that the customer just wants to enjoy it with some good food.  In a way it is a compliment that they would want to drink this special wine with that particular chef’s wonderful cuisine.

Anyway, they have a very nice dinner, a final meal together before the couple leaves for the east coast.  And then the check is presented.  On this check is a $120 corkage fee.  Seriously?  $120?!

I understand they have a policy, and they have a right to that policy, but that $120 cost them about $50,000 in negative promotion.  Would it have been at all possible, maybe, for the manager to come over and at least explain the policy so my friends would not have to endure the heart-attack producing sticker shock”?  Did I mention the 18% gratuity added?!

Seriously, the passive-aggressive approach that happens every day at every single restaurant is really something.  How short-sighted.  Yes, they stuck to their guns and collected their $120, but at what cost?  Like I mentioned before, most of these folks work in the business.  How many people are they going to tell about this offensive act?

There is this thing called the internet

Luckily for them, I don’t name restaurants in this blog, however I do talk to many people out there, and I will not be able to make such a promise.  I guarantee neither will my friends.  Nor my students.

I am not questioning the policy of this particular restaurant, but rather how poorly these things and others like them are handled.  That is what all involved will take away from this experience, not the good food they ate.  Chefs and other restaurateurs often tend to forget this.